Started the new year with three home-cooked meals, and a Fitness Blender 1000 Calorie Workout that took 94 minutes to complete.

Lunch: Chicken soup with radish, carrots and tomatoes, and eaten with quinoa.

I had to use up the expired pecans. It turned ok. But more muffin-like than cupcake.

This one turned out really well. One batch of cake batter made 36 cheese cupcakes. I still have a bunch in my freezer right now. This is after I have distributed the cupcakes far and wide 🙂

When I first moved to Singapore, I had a grandiose dream of baking and sharing wonderful cupcakes.

Four years later, no cupcakes 🙁 The only think I ever made with the Kitchenaid mixer was whipped cream. How sad!

Here is my underachieving and neglected Kitchenaid mixer:

Well, in 2016, I’m going to try and at least bake once a month. Went to stock up my baking pantry with some essential stuff. All my old baking ingredients had expired 🙁

My top goodies to bake are Ispahan (rose, lychee and raspberry) cupcake, and Milk Bar’s compost cookies (with pretzels, potato chips, coffee ground). But I will probably make a Banana Pecan cupcake first. I need to finish up my expired pecans.

When you are new to a place you will need to go out, try, and discover new favorite things because many of the old favorites are no longer within reach.

I’ve been trying out restaurants in Singapore. Reading reviews and blogs and then trying out the place. A new favorite in the Orchard area is Nakajima Suisan at Takashimaya Food Hall. It’s a japanese grilled fish restaurant.

During my first trip, I tried their Gindara Teriyaki set. Gindara = cod fish. The meal was very satisfying. The fish was buttery and the teriyaki sauce was good. The portion size was just nice so I left the restaurant happy 🙂

On my second trip, I tried the Meiro Saikyo set. Meiro = Patagonian toothfish. This fish wasn’t covered in any sauce but I think they marinated or coated it with something before grilling – very tasty. Another just nice healthy meal.

Definitely a place to take mom and dad the next time they visit.

I wasn’t a bagel person while in the US. But I did enjoy the bagels from Wegmans in Bethlehem, PA. Whenever I stayed over at Andrea’s place, she would have bagels and cream cheese ready for breakfast. The toasted multigrain bagel with strawberry cream cheese makes a really satisfying breakfast. Oh..the Asiago cheese bagel from Panera, toasted with butter, was also really really really good.

I started reminiscing about bagels and decided to find out if I could find bagels in Singapore. I found NYC Bagel Factory after some googling. After visits to 3 different Cold Storage supermarkets, I finally found some of their fresh, not frozen, bagels at Jason’s Marketplace in Raffles City, but they only had very limited varieties (i.e., plain, cheese, whole wheat, and blueberry).

In order to try the other varieties, I ordered 12 bagels (plus 1 free) from NYC Bagel Factory online store and it was delivered to my office today in a rather cute box. I bought multigrain, whole wheat sesame, cheese everything, coconut pandan, and chose mocha chip for the free bagel. All the bagels looked really good, especially, the Cheese Everything bagel. I can’t wait to try that for breakfast tomorrow 🙂

I used to look out for different or unusual frozen dinners while grocery shopping in the U.S. In Malaysia/Singapore, frozen dinners are rare and expensive.

I bought this chilled, not frozen, TV-dinner from 7-Eleven. It wasn’t outstanding. For S$3.90 I would rather get real chicken rice. 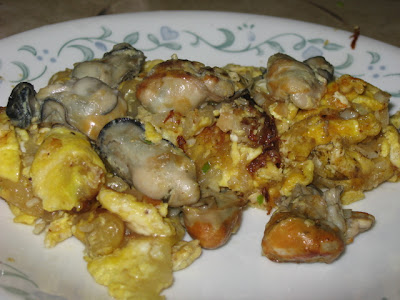 I bought some frozen oysters that were on sale during my last Christmas trip to the Korean grocery store. Yesterday, I looked up Lily’s Oyster Omelette recipe and decided to give that a try. Instead of rice flour, I used sweet rice flour, leftover from my kimchi making days. 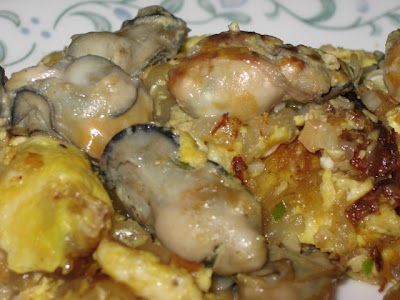 I think it looks pretty good, don’t you? It tasted quite alright too 🙂

I invited four friends over for this year’s reunion dinner. Unlike last year’s elaborate Yong Tau Foo reunion dinner, I wanted to keep this year’s menu simple. Nothing fancy, just dishes that I might cook for myself any other day. So we had: 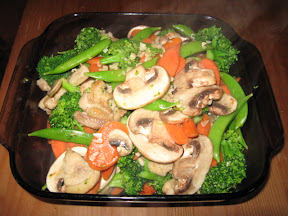 I really liked the color of this dish. I kept to the common broccoli and carrots because my American friends may not be too adventurous when it came to their vegetables. 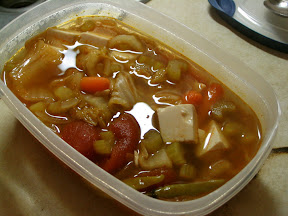 I didn’t have time to take a picture of the soup so here is a recycled old photo of a tomyam soup that I made ages ago. This isn’t a safe dish as it may be too spicy, but at the same time it shouldn’t be totally new since there are some Thai restaurants around. This soup added the “hot, spicy, sour” factor to the meal. 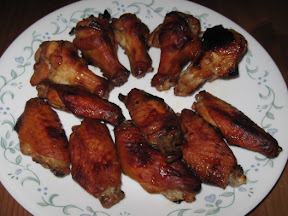 I had to include a child-friendly item because a friend was bringing her 9-year-old daughter. But the girl would rather play with my Lego than eat. 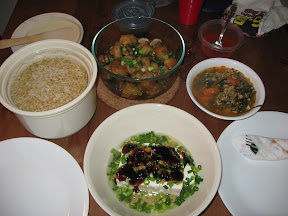 This photo was taken at another dinner that I hosted 2-3 months ago. I made a tofu theme dinner that day (i.e., steam tofu, stir-fry tofu puff with mushroom, and tomyam soup with turnip tops and texturized vegetable protein TVP-a soybean product).

Anyway, the steam tofu was served the same way, with green onions, garlic oil and oyster sauce. This was the “fear factor” dish since tofu is not common in this area and some people are afraid of the white cheese-looking item.

I wanted to make this dish to expose my guests to authentic simple Chinese food. I was hoping that my guests would take a step out of their food comfort zone and try the tofu. I think two of them did but one of my guests later told me she didn’t try the tofu. She failed the fear factor test! 🙂

And finally, we had carrot cake (that I baked) and eclairs (that someone brought) for dessert.

During my last two trips to visit the Cheah family, I’ve been exposed to some good dogsitting experiences. Since I’m staying in a no-animals allowed student housing, it’s nice to hangout with other people’s pets once in a while. When I found out that a friend is looking for someone to co-dog-plus-house-sit with her. Her advisor will be away and needed someone to take care of the two dogs but my friend couldn’t stay the entire duration, so I agreed to help out for a few days.

I thought it would be a nice de-stressing vacation, in addition, the prof’s house is considerably nearer to the Korean grocery store and the nice chinese buffet.

For several days prior to my dogsitting commitment, I thought I would not be able to make it because my car was in the garage. Thankfully the car was ready on time.

On Sunday (Dec 28, 08), I made the almost an hour drive to the prof’s house, which was in the middle of nowhere. After checking in on the dogs, I drove to the chinese buffet for lunch.

The food was good, unfortunately they didn’t serve the black bean mussels and cheese-baked mussels, which were the two items I was really looking forward to.

Harry is also a very good companion when I’m either watching TV or doing some reading.

Unfortunately, he was too used to always being with a human person. I sort of decided that I didn’t want the dogs in the bedroom, so I locked them out of the room that I slept in. They had the rest of the big house to themselves but Harry was not happy with that arrangement. He whined and barked, off and on, throughout the two nights I was there! I could have let the dogs in but I didn’t want to give in to them. If you watch the movie Marley and Me, you’ll see the miserable sleep I had for those two nights.

After a sleepless night, I had to wake up at around 6am to let the dogs out! Crazy dog schedule.

One more thing, I couldn’t get online while I was there. That was the biggest routine buster of all. Fortunately, there was a treadmill in the house, so I was able to squeeze in a run each evening.

On the last day, I went for another round of chinese buffet. This time they had the black bean mussels but the mussels were small. I also bought a carload full of groceries. So the money I earned from dogsitting all went into the groceries and buffet lunches.