Not so hardworking in July. I’m trying out a mostly strength training program in August, see how that will work out.

I was reading some online posts about tips for work-life balance. On one site that lists multiple tips, one of the tips is to work from home on some days, but the following tip is to leave the work in the office, don’t take it home. Seems contradictory, right?

For me, some tasks, especially writing tasks, are tied to a major chunk of procrastination. When I plan to do writing at home, I am so prone to procrastination and will often end the day feeling really bad because I “wasted” the whole day. If I do this on a weekend, I would totally burn my weekend — no work done, no true rest.

This year, I would like to rid my home of I-should-be-working guilt. It’s Saturday 12:13pm, and I’m in my AC-less office, revising a manuscript.

Just a brief recollection of the highlights from September 2009 to December 2011.

February 2010:
Went for a job interview in Texas two days before my birthday.

April 2010:
Dissertation defended successfully on April 15, 2010 (Tax deadline day). Vice-President Joe Biden was on Lehigh campus during my defense. That caused some inconveniences to my defense attendees but made my defense so much more memorable. Accepted a tenure-track academia job offer from the university in Texas. Found out that mom, dad, and aunt will be coming for my commencement. Good things come in threes!

May 2010:
Hooding ceremony and Commencement. Happy reunion with folks from Malaysia and Natalie from Missouri.

June-July 2010:
Transitioning from Pennsylvania to Texas. Finishing up research work at Lehigh. Packing and getting rid of stuff. Spent many hours looking for a newer used car. Said goodbye to the Passat and welcomed the Vibe (my Wai-Bee). Spent many hours online looking for an apartment in Texas. June 15, 2010 – Precious niece, Joanna, entered my world.

August 2010:
Drove to McKinney, TX, with all my earthly belongings in the car. Very thankful for the presence of my co-driver, Natalie. Stopped by Monticello on the way. Spent many hours setting up the apartment. Started new job.

April 2011:
Made one of the most difficult decisions of my life: I accepted the job in Singapore.

July – August 2011:
Went back to Malaysia after 33 consecutive months in the US. Visited Singapore, my future home.

November 2011:
Sold my dearest car, Wai-Bee, to Natalie. Shipped most of my stuff to Singapore. Donated all my big furniture. Moved out of Greenhaven apartment.

December 2011:
Spent one more week at a friend’s place in McKinney, TX. Flew to Bethlehem, PA, to spend another week with some dear friends. Flew to Singapore to finalize on housing. Went back to Malaysia for cousin’s wedding and Christmas. Went to Singapore and began work on December 27, 2011.

The other day, I learned a new Singapore term: “atas.” “Atas” is the malay word for up/above. It’s also used to denote a “high-and-mighty” attitude. It’s a term used to describe Singaporeans who have been overseas and returned to their home land but they come back with a foreign accent and a high-and-mighty attitude.

Hmmmm…I wonder if I’ve displayed this “atas” attitude when I interact with people in Malaysia and Singapore. Do I seem “atas” when I reminisce about my days in the US? Am I “atas” when I compare things in the US with Malaysia/Singapore?

On a different note, I think most Singaporeans have an “atas” attitude towards Malaysia and Malaysians.

And moved to Singapore … the city of endless summers, rainstorms that will cause massive traffic jams, storm warning sirens, horizon covered with HDB flats …

Crowds lining up outside every single restaurants at every single shopping malls. Crowds like sardines packed in sweat in the MRT trains and buses.

Large crowds shuffle down the escalator and out the MRT stations. I call this the “Singapore Shuffle”.

It’s quite amazing to observe the two crowds on the opposite side of a pedestrian crossing in Orchard Road come head on as soon as the green-man comes on. You would think that somebody is going to get hurt, but like a school of fish that would move in unison with such grace, these two crowds would just merge together and then separate and then each would go on their own way.

Everyone is together in a small space but each in their own digital world.

iPhones/iPads, smartphones, and other time-passing digital devices dominate life here. I would estimate that 80% of people in the MRT trains are on some-sort of digital device. 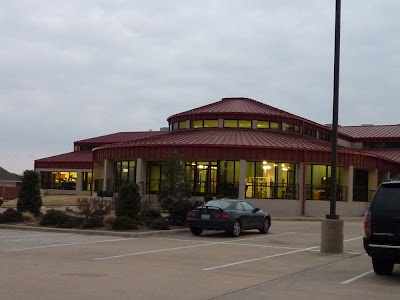 Preston Trail: The church that I’m attending in TX. 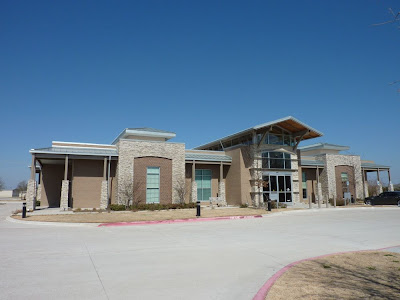 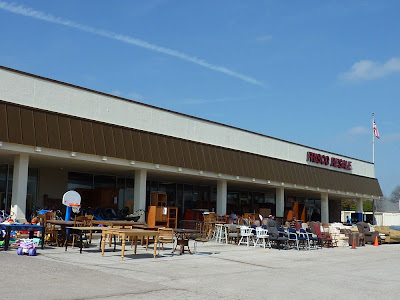 Frisco Resale: When I need to shop. 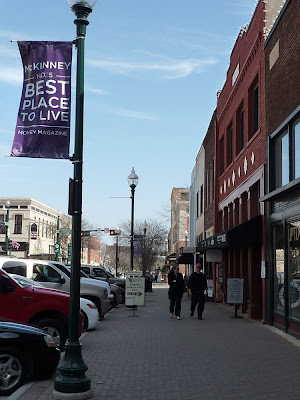 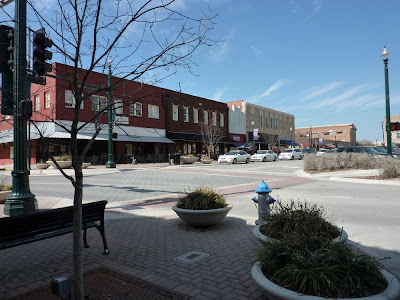 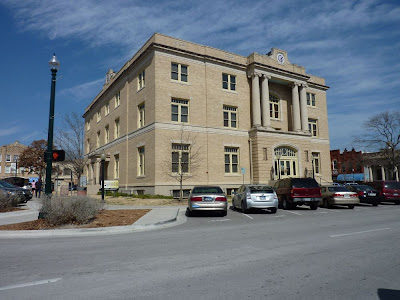 I recently received the 27-inch iMac that I requested as part of my start-up funding. My work MacBook Pro looks tiny beside the iMac. 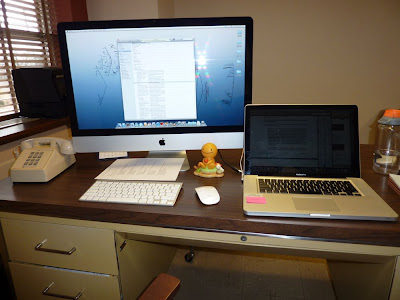 The wireless keyboard and wireless magic mouse are pretty cool too. 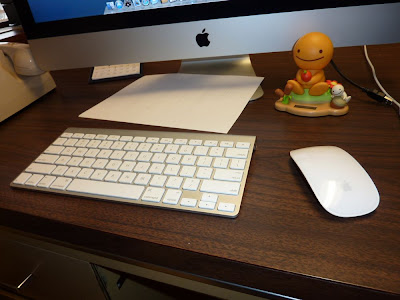 I am still using the MacBook Pro as my primary work computer, so the iMac is sort of just eye candy in my office. What a waste of great potential!

I definitely need to get back into video-editing again and learn the latest iMovie software. 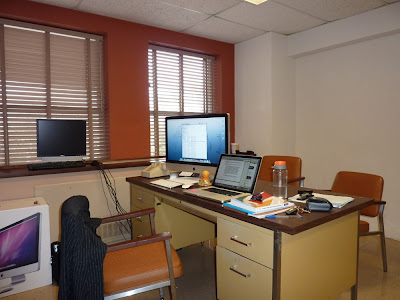 I still have the Dell PC tucked away in my office. I need it for SPSS (statistics software). The mac version of this software is too expensive. I should also get a painting for the wall. It looks too bare and sad. 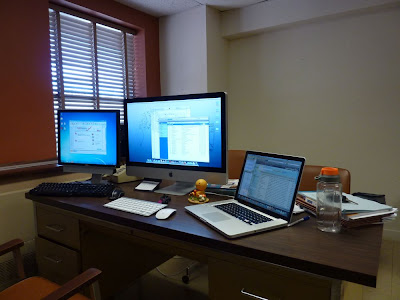 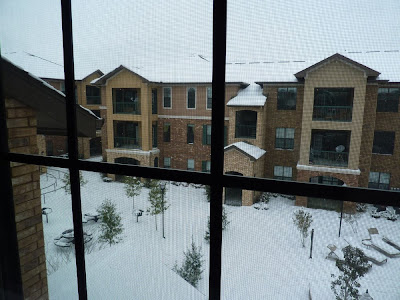 Needless to say, the big ice and snowstorm (plus many days of freezing cold temperature) of February 2011 caused everything to come to a halt. Schools closed for many days. The news said it was a once-in-20-years event. And I was here to experience it. I actually did enjoy the “time off” from work 🙂

Looking through my Pennsylvanian eyes, the snow and ice weren’t really that bad at all. The bad thing is that the people here don’t have the right equipment to deal with the snow. Me including! I had to use my swiffer mop thing to get rid of some of the snow from my balcony. 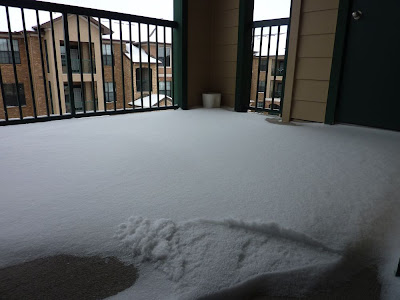 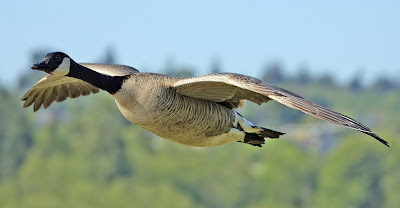 Lately I’ve been noticing many Canadian geese flying around and hanging out at the harvested corn field behind my place. Twice while I was out walking (and probably scaring the geese), I watched the geese (over 200 of them) just take off from the field simultaneously, in sync. That was an awesome sight and sound. And both times, I wished I had my video camera with me.

Today when I went out for my walk, I brought along my tiny flip video hoping that this will be the day that I catch the most awesome video ever.

When I came out of the apartment, the sky was full of flying geese, as shown in this video.

And the field was filled with them too. I kept watching flocks of geese check out the place and landed in the middle of the field. In the video below, you can’t really see the geese in the field but there were lots of them walking here and there.

All that time while I stood waiting, I kept thinking, “Where are the crazy dogs, when you need one?” None of the dogs that were walking with their owners ran out into the field to chase the geese. So the geese just walked around the field, making lots of noise.

Finally, the sun set and it got rather cold. And I was tempted to pick something up and throw it at the geese, just so that I could capture a “Canadian geese: Awesome mass take-off” video. No, I didn’t throw anything and the geese just hung around in the middle of the field.

For a while, I kept wondering, “Why can’t the geese just fly quietly? Why do they have to make the loud honking sound all the time?” I finally figured it could be their way of checking if their gang is still behind them when they are flying in their big V formation. I mean they can’t be turning their heads all the time, right 🙂

Apparently their loud honking sounds, when they fly by, also indicate the arrival of Spring.

Stormtroopers surveying the terrain in an Imperial Dropship.

Shadow stormtrooper pilot: No rebels in sight. Ok, let’s report back to headquarters.

Shadow stormtrooper pilot: What?? No mail for me!!

Stormtrooper #1: Did you watch the Phillies game? That was AWESOME!!