I was driving up to the department for a meeting with my advisor, when I noticed that something has blocked my rear view. 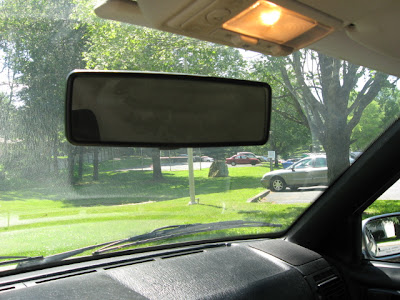 The fabric covering of the headliner (or roofliner) was peeling off from the back. I turned down my windows, hoping the wind would blow the headliner up so I can see through the back windscreen. But the stronger wind blew more of the headliner down. By the time I reached the campus parking lot, the headliner looked like this. 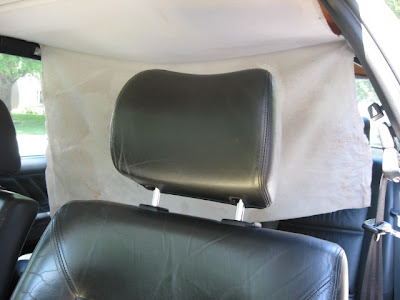 After my meeting, I tried to use the hand grips to hold the headliner up. 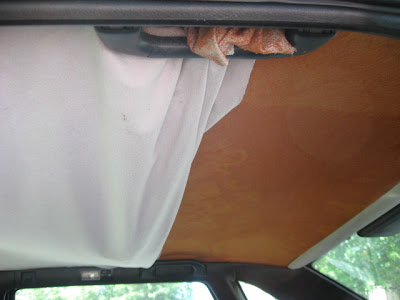 When I got home, I did some temporary emergency “repair” to remediate the situation until I figure out what to do next. I rolled up the headliner, tied the ends with rubberband and tied it to the handgrips with ribbons. 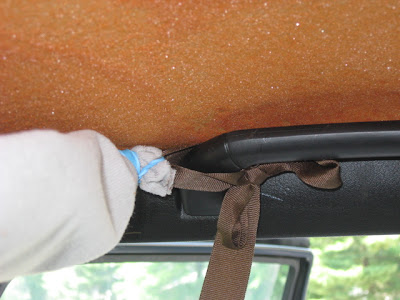 Surfed the web for some do-it-yourself information and I actually found forums discussing what to do with a headliner that’s peeling off.

Drove to Walmart to look for the stuff that I would need: (a) a can of 3M Headliner adhesive spray, and (b) 1 or 2 packs of twist pins (available at the sewing dept). 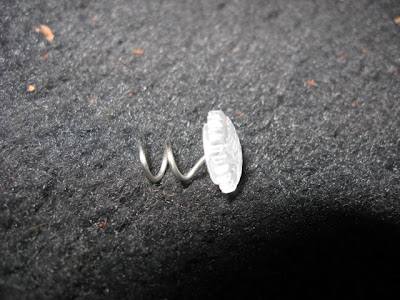 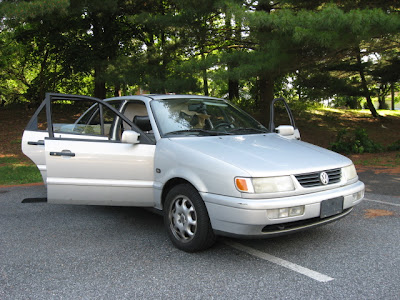 Step 1: Remove as much of the crumbly gluey sponge material sticking to the fabric and to the “ceiling” of the car. I started doing that with some sandpaper but found that it’s much faster if I just use my hand.

Step 2: Vacuum away as much of the orange/brown sponge material from the car seat and the floor. 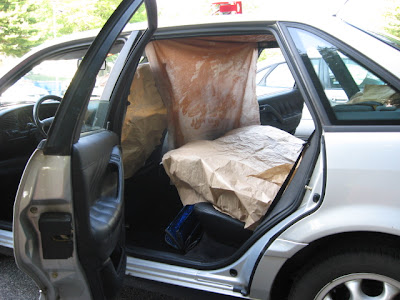 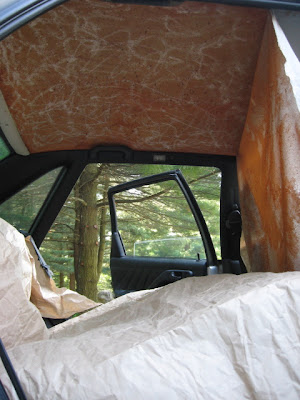 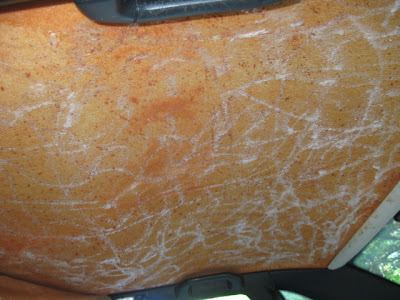 Step 5: Quickly walk back to my apartment to get camera to document my hard work.

Step 7: Quickly get out the twist pins and start pinning the fabric to the headliner board. The ceiling is made out of cardboard-like material. Place the pins in strategic places all over the ceiling. I’m not sure if the adhesive spray is needed since the fabric doesn’t seem to stay stuck to the ceiling. 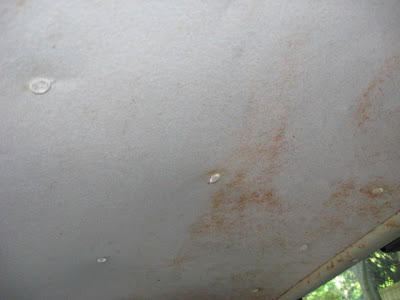 Step 8: Use a scissors to push the extra fabric into the side paneling. Since I rolled up the fabric when I temporary repaired the headliner, the clean side of the fabric is now covered with sticky specks of sponge material..and it won’t come out 🙁 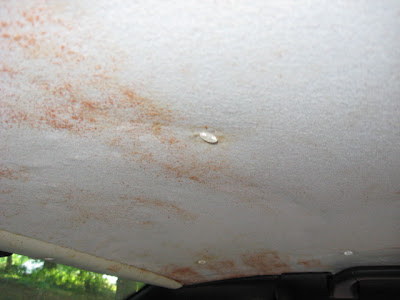 Happy Father’s Day!!
My dad would be proud of my car DIY job 🙂 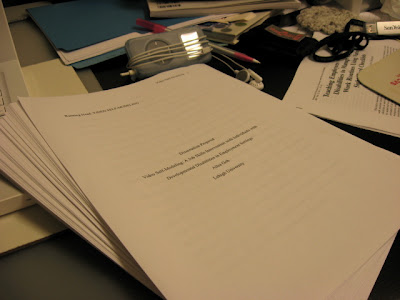 26 pages. Everything that I think I need to convince my committee that what I am proposing to do is actually worth doing.

20 pages. The what, when, who, how of getting the research done.

39 pages. Stuff to fatten up the proposal 🙂

June 24. I meet with the 4 professors in my committee. If the proposal is approved, then I can go ahead and start doing what I said I would do in the proposal.

I just received my advisor’s feedback on my latest draft of my dissertation research proposal. After glancing through the comments, I realized that there’s not much revisions to do…so, I guess this chapter of my life, struggling to write and rewrite my dissertation proposal, is finally coming to an end..whew!! Tomorrow, I’ll have to finalize the date and time (some time end of June) when the 4 professors in my dissertation committee will meet with me for a prolonged they-question and I-answer session.

As I ponder over the whole writing process, it wasn’t as painful as I thought it would be. I expected more revisions and several more drafts. Wow, now that this writing process is over, I wonder what should I do with my additional stress-free time. Patapon? Crochet? Cross-stitch? Update special ed blog?

Hold on, I’m not done with studies yet. I’m just almost done with the research proposal; after this, I’ll have to actually do what I proposed in the proposal, and pray that everything will go as planned and I’ll get great results in a short amount time. Yup, that would be ideal….

Every year, the university’s community service office will have a move-out sale. They collect all the stuff that students (who have graduated and are moving away) donate. The money from this sale would go to neighborhood charity organizations. This year, I volunteered to help out during the sale. I was there at 7am, helping to move boxes and boxes of stuff from the trucks, and then arranging those stuff (e.g., clothing, housewares, electronic goods, furniture).

There was one really big Sony TV for sale. It had a crack at the back, but otherwise, in good running condition. Two guys removed it carefully from the truck, but the bottom of the TV cracked a little more. As they were lifting it to the TV area, the TV literally fell apart. The plastic casing broke into hundreds of pieces. The inner tube crashed to the ground and circuits spilled out everywhere. I’ve never seen a TV in that condition before…hahaha.

My volunteer shift ended just before the sale started. So, I stayed a while longer and shopped some. I grabbed
– 2 new Lehigh t-shirts (I’ve always wanted to get a Lehigh t-shirt but didn’t want to spend close to $20 on a t-shirt)
– 1 new random t-shirt
– 1 like-new pair of shorts
– 1 very nice reusable shopping bag
– 1 rolling pin
– 1 set of stainless steel measuring cups (I have plastic ones but they are difficult to wash if I use them to measure cooking oil, stainless steel is much better)
– 1 new cap
– 4 pot holders
– 1 small first aid kit
All these only cost $7.50…not a bad deal! 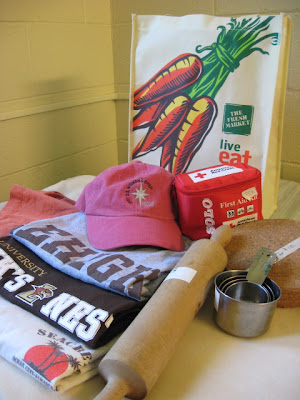 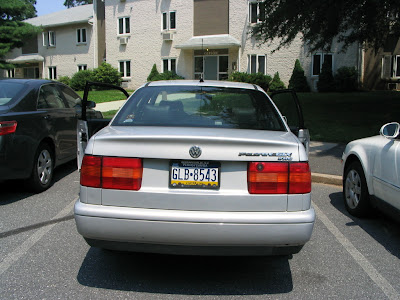 When I got my first car in July 2006, I bought a notebook to keep a log of the cost of maintaining her. And for some crazy reasons, I also kept the receipts whenever I pumped her up with gas (petrol).

The cost of feeding her and feeding my lifestyle.

I’ve stopped running for quite a while now. My right knee hurts when I run, and even after a prolonged period of no running, it still kind of hurts when I try and run. So I’ve sort of given up on running. Nowadays, if I do go out to the trail, I’ll do intervals of fast and slow walks (e.g., 3 minutes of brisk walk followed by 2 minutes of relaxed walk).

And for the summer, I signed up for a spinning class. What is spinning?

Spinning is an aerobic exercise that takes place on a specially designed stationary bicycle called (obviously enough) a spinning bike. As you pedal, motivating music plays and the instructor talks you through a visualization of an outdoor cycling workout: “You’re going up a long hill now, you can’t see the top yet.” During the class you vary your pace — sometimes pedaling as fast as you can, other times cranking up the tension and pedaling slowly from a standing position. This helps you to focus inwardly and work on your mind as well as your body. (Neporent & Chiocchi) 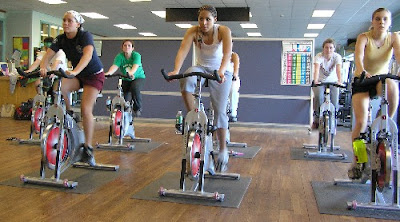 That’s just a picture I got off the web, and it’s not the gym at Lehigh.

Today, I went for my very first spinning class. Totally clueless about how to set up the bike. After a short lesson from the instructor, I was ready.

And she went on:
One more round, and we’re done with the warm-up.

And me:
What??!! That’s only the warm-up??!! Oh, no, what have I done? This spinning class might turn out to be not such a great idea after all…

And she:
OK, now we’re going to some jumping.

And me:
How on earth do you jump of a stationary bike?!

Surprisingly, I slowly adapted and managed to last till the end of the 1 hour class. When I got off the bike, my thighs felt numb. And when I walked, I felt like my legs would give way and I would crumple to the ground. But I managed to walk to the car. I wasn’t even sure if I could step on the accelerator and brakes properly. And I drove, up the mountain, down the mountain, all the way home.

Since the campus is located in a hilly area, I would often see cyclists slowly riding up the steep hill. Whenever I see one cyclist making his or her way up the hill, I would think, “These people are crazy. I would never ever attempt to ride up this hill, in the name of fitness or challenge or whatever. That’s just too much of a torture.”

Today, I spent an hour cycling on a stationary bike, going nowhere, making my way up imaginary steep hills. And at the end of it, I drove up over a small mountain to get home. How ironic! I guess I’m the really crazy one here…

Spinning terms:
Run = cycling while standing up on the pedals
Sprint = cycle as fast as you can
Jump = intervals of standing and sitting while pedaling